#1
I am trying to create a scale to measure "comportment" (bodily manners, gyougi) among Japanese and I am doing an exploratory factor analysis according to the instructions here
[video]https://www.youtube.com/watch?v=g_3kaSnq-DY[/video]

But hold on, thinks I. It is argued that the Japanese cognise groups (of people but also perhaps of things) differently.

According to some great research by Masaki Yuki (2003), while Westerners see groups as having a number of shared traits (to a greater or lesser degree) the Japanese cognise groups (of people) as being a network of binary relationships in which some members may share no traits but be connected by a sort of family resemblance (Wittgenstein, 1953) network to other members. So just as a family may have little to no similarity between some of its non blood related members (hopefully) there would be a network path that joins all of the members by some sort of similarity (including shared interests, if only in children) across marital bonds.

Diagrammatically the first two digrams below showing (a) Western and (b) Japanese groups. 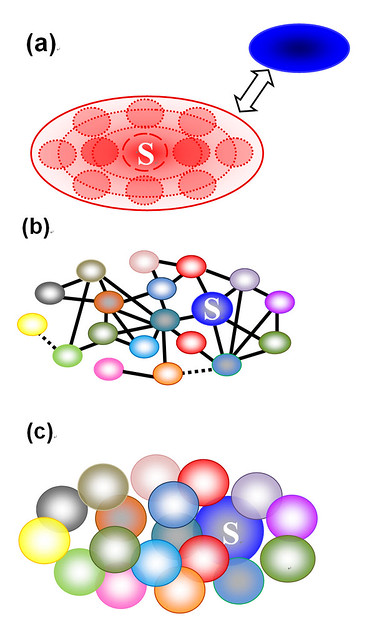 Intergroup Comparison versus Intragroup Relationships: A Cross-Cultural Examination by Timothy Takemoto, on Flickr

It seems to me that if, as it is argued (Nisbett, 2010) people see the world in the same way as their culture, then a factor analysis would be appropriate to reveal underlying shared factors in groups of both people, things, and behaviours (such as good manners). E.g. Western style good manners might share, to a greater or lesser extent, factors such as "behaviours that help others" "behaviours that hide shocks."

However, when it comes to Japanese manners, there may be no underlying, rational, commonalities to the group of behaviours that are considered "good manners" but a network of relationship that connect them together even though they may share nothing.

I have SPSS. I have just run a factor analysis.

In order to analyse a Japanese group, grouped by binary connection rather than group wide shared commonalities, should I have used "orthogonal" rotation? Or a completely different (non-factor) analysis such as a "cluster analysis"?

And can it (whatever such analysis is, if it exists) be performed with vanilla SPSS?

I want to be able to argue that my items do relate to each other, but not by sharing group wide commonalities.

Social network analysis which concentrates on diads seems to be more appropriate.
https://www.youtube.com/watch?v=ti-98tIzfEk

I can use
http://socnetv.org/downloads
To anslyse the correlation matrix created by SPSS from the original data as an "Adjacency matrix".
This will treat each item as a person with a degree of "adjacency" (in fact correlation) with all the
other items. 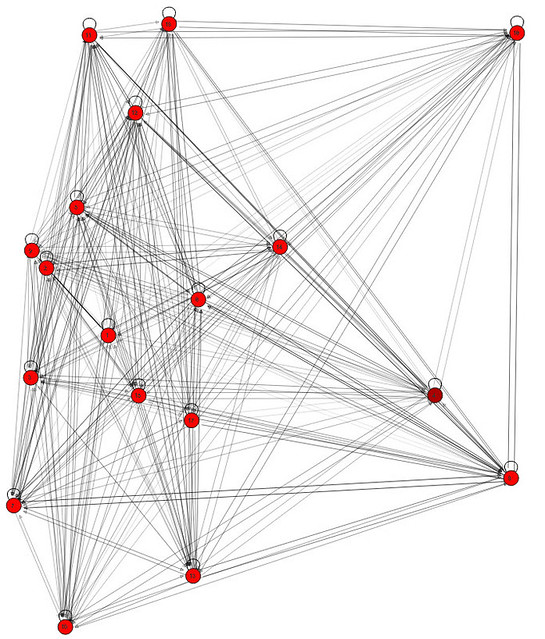 Comportment Adjacency by Timothy Takemoto, on Flickr
Top right is "I hold my rice bowl when eating" which is out on its own but well related. Bottom right is "I can have good comportment when needed," which again is well associated but out on its own perhaps because it is a bit like bragging. The node near that bottom right is "I bow when I leave a room with someone in the room." Those three are sort of no brain, over-claimables that someone who does not have good comportment might nonetheless claim that they (can) do.

The one in the centre, node 14 is mmm, "I walk with an upright stance" which is pretty central to comportment.

My results are not too bad with determinant at just above the threshold of 0.00001 at .00008 Barlett significance is good at 000 (<.001) and KMO at .904
Results (with items in Japanese) here below
http://nihonbunka.com/temp/output_all_items.htm

I have found a solution. Goekoop, Goekoop and Scholte (2012) compare using factor analysis (principle component analysis) and network analysis (network community detection) to find groupings of personality traits. The network analysis uses Wakita-Tsurumi (2007) NCD algorythm on the correlation matrix, as I attempted above, (except including "facets"). I do not seen an implementation of is NCD algorythm on the Net. The wonderful software above uses the Bron–Kerbosch algorithm, the classic algorithm for finding "cliques". Unfortunately the software crashes when I attempt to use it.

But at least, I see that network analysis is used to analyse and find groups in psychological scale data in (Goekoop, Goekoop and Scholte, 2012).